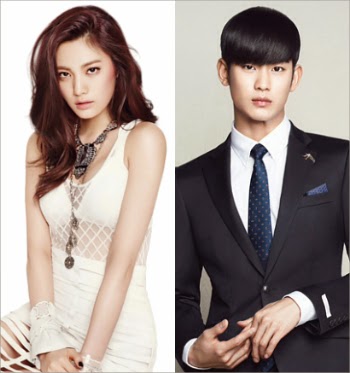 Nana Orange Caramel to comment on rumors courtship with Kim Soo Hyun. While appearing on " Beatles Code 2 ", Nana asked about the truth of these rumors.

" There are rumors circulating lately that mention Kim Soo Hyun and Nana dating?" Shin Dong Yup asked the host. Nana explained that the rumor is not true. Orange Caramel Other members also explains the origin of the spread of rumors.

" Yes I know about the rumors. I heard from the staff at a store that reporter who pass, " said Nana. " However if there is smoke there must be fire. "

Raina and Lizzy then explained that it all began when the actor " Man from the Star " was admitted to Orange Caramel is his favorite girl group. "In the past , Kim Soo Hyun never chose Orange Caramel as a girl group he likes. We thought maybe it was the reason why the rumors appeared, " they said.