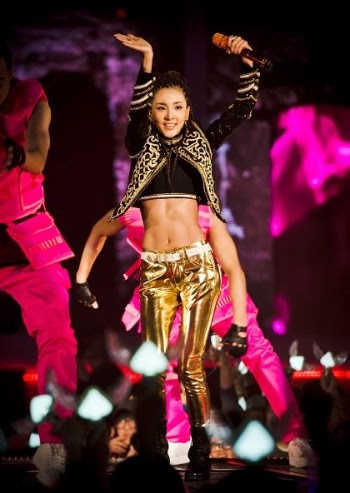 2NE1 held a successful concert tour opening for the world 's "All or Nothing " in Seoul at 1-2 March 2014 . They give a stunning appearance in front of a total of 12 thousand Blackjack who packed the arena for a two-day concert .

In concert 2NE1 give a special treat by airing new MV . They also performed a new song from the album " Crush " has just been released . But they still sing the popular old numbers like " Fire " and " I Do not Care " which provoke hysteria audience .

New Group D , Winner , also appeared and got a special stage in the concert. Interestingly , Sandara Park horrendous audience by wearing a costume that mempertontokan stomach when performed " Crush " and " Fire " . Despite having a cute image but he looks sexy in concert with her ​​flat stomach and muscular .

On that occasion Dara also expressed his satisfaction with 2NE1 's second full-length album . " Although it takes a long time , but personally I'm happy with this album , " he said in front of an audience .

2NE1 will continue the concert series " All or Nothing " to China , Japan and other Asian countries . In total there will be nine countries visited the mat 15 concerts in 12 cities . This tour is directed by Travis Payne and Stacy Walker who also handles their first world tour .