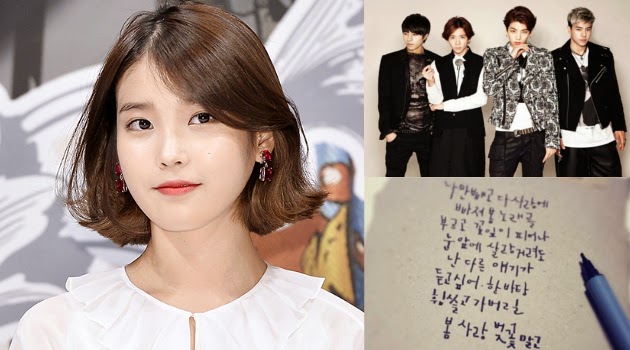 IU will show his ability as a songwriter more broadly. He was going to work on the debut song for boyband named HIGH4. Now the singer of " Red Shoes " it also shows the results of his work.

IU handwriting upload photos to the lyrics of the song titled " Besides Spring , Love , and Cherry Blossoms" in the fan cafe . The song he created for HIGH4 but also will debut a duet with him. HIGH4 is scheduled to debut on April 8.

" Except me , of all people fall in love and sing a song about spring. Though flowers bloom beautifully in front of my eyes, I want to hear about other things. 's Not about spring, love or cherry blossoms which could go away. "

IU says now focus on supporting HIGH4 after it completed its activities in Hong Kong . He remained enthusiastic despite not HIGH4 artist with one agency. The singer of " Good Days " it was not reluctant to ask his fans to support their debut.

"I will support an all-out HIGH4. Though not an agency but they are fun and talented friends. So please support them yes," wrote IU. "To say this as honestly as possible impressed promote and beg, but carrying them yes. If you support it then I will be more spirit to work hard this year."