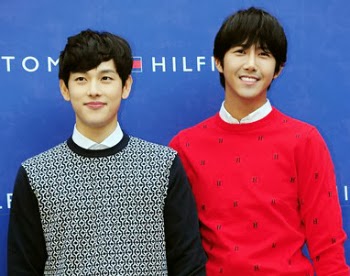 Kwanghee confirms about her that is rumored to have sabotaged Siwan in a variety show. Members of ZE : A 's denied these rumors as a guest in " Song of Hope at Noon 's Kim Shin Young ". He said he only helped Siwan to dare to speak in front of the camera .

" Siwan good at acting , but he does not talk much on the variety show , " he said . "I was trying to help him to talk , but the news that appeared in the media becomes redundant to say I have taken Siwan dialogue . "

Host Kim Shin Young also defended Kwanghee statement . " To be honest , Kwanghee has helped Siwan to be yourself ( in variety shows ) at this time . When he appeared on MBC's ' Quiz to Change the World ' , Siwan Kwanghee always carry or Hyungsik to help them talk , " he explained .

Kwanghee also added that he would help Junyoung become popular . " This year 's turn Junyoung who will help you, " he concluded . The " Song of Hope at Noon 's Kim Shin Young " was aired on the station MBC .