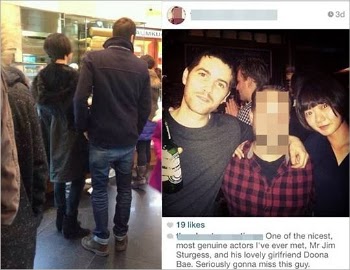 Rumors of romance between Bae Doona and Hollywood actor , Jim Sturgess , pushed back . Last year they suffered rumored romance since starring in " Cloud Atlas " . Now both are caught path together again when the Lunar holiday .

Togetherness Doo Na with Jim was exposed through a netizen who claimed to witness met at the bakery . He photographed them from behind while standing in the checkout then upload them to the internet forum . " When the Lunar holidays , Bae Doo Na and Jim Sturgess streets in downtown Seoul , " wrote the netter .

Some netizens also claimed to have seen the actor Doo Na " Upside Down " along the road on 2 and 3 February. " I saw Bae Doo Na today. He came to the bell tower with Jim Sturgess is rumored relationship with him , " wrote a netizen who imbued another.