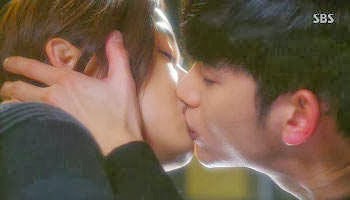 Kim Soo Hyun's action has always managed to invite the attention of the fans . This time the kiss scene in the series " Man from the Star " managed to suck up a lot of attention . Although only a short duration of the scene managed to achieve a high rating .

In that scene , Jun Ji Hyun ( Song Chun Yi ) frustrated because he felt Kim Soo Hyun ( Do Min Joon ) never showed her liking . He was then given 15 seconds to Kim Soo Hyun to change his mind . After 15 seconds , Ji Hyun will go suddenly and kiss Soo Hyun interesting .

When this scene aired , the ratings of "Man from the Star " reported skyrocketed to 31.3 percent . This rating is the highest success in the series . If averaged , the episode had a rating of 24.4 percent .

" Man of the Star " tells the story of a handsome alien who has super strength , Do Min June He has lived on Earth since the Joseon Dynasty . Four centuries later he falls in love with an actress named Chun Yi Song .

The series were also enlivened by Park Hae Jin and Yoo In Na . " Man From the Star " aired on SBS and always get the highest rating compared to serial competitors .