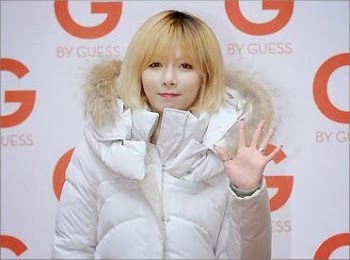 Some time ago HyunA rumored pregnant with her ​​in Trouble Maker, Hyunseung Beast. At that time the agency threatened to sue the gossip spreader. Now the source of rumors have appeared to straighten out the problem.

Apparently the rumor started with the beginning of a smartphone app called I'm a reporter Too . Using the application , gossip written in an article as if the official statement from Cube Entertainment . Because it looks genuine then the rumor spread quickly on social networking and chat applications such as KakaoTalk .

Now the application developers provide a statement regarding the use of its services to spread gossip HyunA . " Writing that slander others , such as rumor - HyunA Hyunseung , it is not true . Contents text itself extreme and too detailed , " wrote CEO JI2SOFT.

" At first I made ​​it as a parody of applications . Most users make the article as a joke but it turns out some of the abused to slander , " he continued . " Not to share the link , users wear a photo even so difficult to distinguish genuine or fake and eventually become a controversy . "

" I made another application that is downloaded 3 million times 30 thousand times but that was only made a lot of trouble , " he added . " I would consider this all and do an update as soon as possible . "