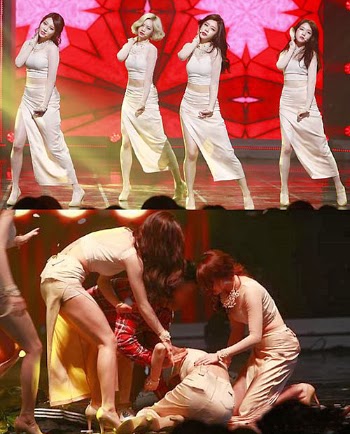 Shocking incident occurred when Girl 's Day appears to sing " Something " on " M ! Countdown " on Thursday ( 16/1 ). Maknae Hyeri suddenly fainted on stage after completing his performance . He was immediately rushed to the hospital .

Dream Tea Entertainment spokesman claimed Hyeri being sick with the flu . But she insisted to keep moving forward on the stage entertaining fans .

" Hyeri is being sick with the flu , but he still wanted to perform , " he said . " But when he's on stage fatigue and fainting . We planned to give him a break after receiving IV drip from the hospital . "

Hyeri itself finally gives news about his condition after conscious . Tony Ahn 's former lover made ​​sure he was okay and apologized already made ​​the fans worried .

"Sorry to make you worry even though no nothing. I'm fine ! " Hyeri tweet . " I thank you for your attention ! Let us meet in a more energetic conditions tomorrow ! Careful not to get the flu all . Uhuk - cough . "

Girl's Day now it is busy with the promotion of her latest single , " Something" , and the mini album " Everyday 3 " . Parties agency decided Hyeri will not appear on " Music Bank " on Friday ( 17/1 ) , although his condition had improved .