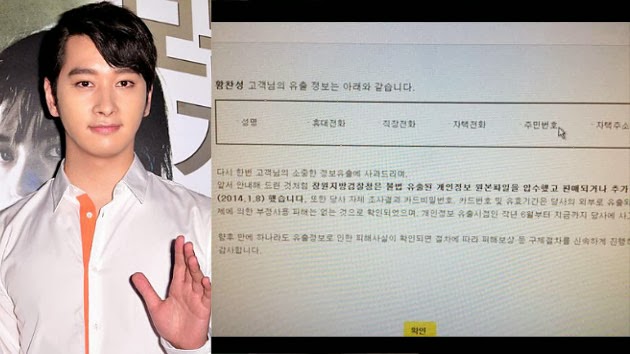 Bad news visited 2PM Chansung related personal data . He became one of the victims of data breaches by a bank . Chansung personal contact information is now spread on the internet .

At the end of last week a large bank in Korea experienced data leaks clients , one of which is Chansung . On Jan. 17, prosecutors found that the Credit Institutions Korean employees had leaked information of 100 million people who use Lotte Card , KB Card and NH Card .

Chansung was spilling his frustration via Twitter on January 19 by uploading a photo email notifications from the bank . In an email that listed names , phone numbers , home addresses belonging to a social security number Chansung . This incident caused him to lose confidence in the bank .

" I do not know what they want us to do this even though relief amidst ugliness like this , " Chansung tweet . " But now who should I trust when financial firms are no longer safe . "

Not only Chansung , Kim Yun Ah Jaurim was also becoming a victim . Even though the data itself participated revealed he was no longer a member . " How can the personal data of credit cards that have kubatalkan 6 years ago can still be revealed ? " he complained on Twitter .