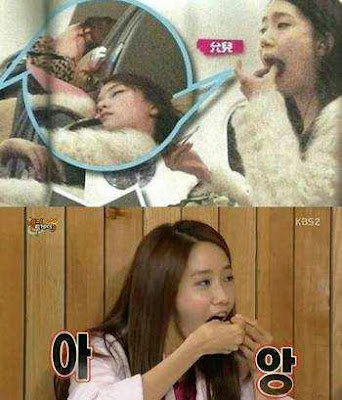 During this lovely girl Yoona is known as graceful and feminine . But Yoona still human like everyone else who is. Recently circulated photo Yoona pose undue .

The pictures were taken while Yoona was on the plane . The photo shows two personnel of Girls ' Generation 's were still asleep with his mouth open . While other photo shows Yoona was putting food into his mouth .

Could be a fun chat on the internet , Yoona finally explained the photo turned out to be secretly taken it . " Photo was embarrassing paparazzi magazine reported in Hong Kong . Photograph was taken just as I would incorporate seaweed rice into my mouth , " said Yoona on the show " Happy Together 3 " .

" I was on a flight to Hong Kong and I think the man sitting in front of me was taking my picture with a hidden camera , " complained Yoona . " Photos when I fell asleep with my mouth open that big printed in the magazine instead . Want to erase forever the photos . "

Netter and fans were giving encouragement to Yoona . " With any pose , Yoona still be beautiful , really , " commented a netter .