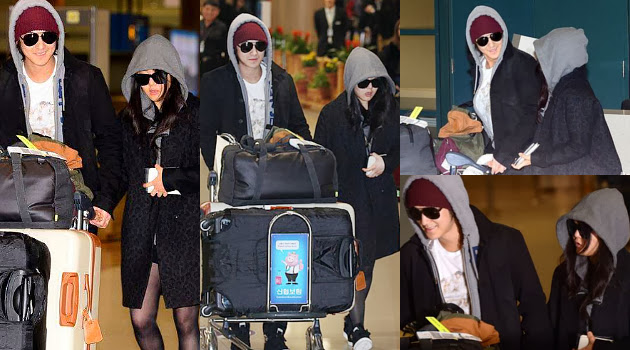 Kim Bum and Moon Geun Young arguably become the new celebrity couple of the most eagerly awaited . Finally they appeared together in public since announcing dating .

Kim Bum and Geun Young spotted together arriving at Incheon airport on November 25 . Wore closed , they look relaxed home from a vacation in Europe . Even couples series " Goddess of Fire " is holding hands tightly as he pushed the suitcase regardless journalists photographing .

Whether intentional or not , but Kim Bum and Geun Young spotted wearing similar clothes . Both were wearing hoodie jacket gray coated black coat that looks exactly the same in all to see. Geun Young appears indifferent but Kim Bum is seen smiling while holding hands .

Kim Bum next schedule is going to Japan on November 30 for the promo " That Winter , The Wind Blows " . While Geun Young will rest after his return from a holiday in Europe .