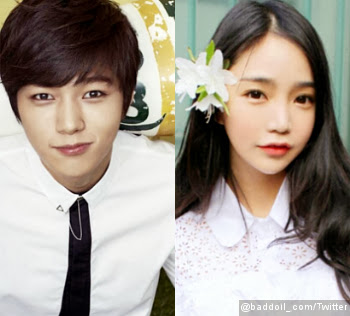 In September rumors circulated that L Infinite courtship with ulzzang named Kim Do Yeon . When it Woolim Entertainment denied the truth . But now the agency recognizes that the first rumor was true .

" L has been dating for 4 months with the girl , starting from September, when rumors circulated of , " said an official statement . " At that time l want to admit it but in order to protect the artist then as our agency has denied these rumors . Nowadays we're sorry . "

" When rumors emerged Infinite was touring overseas and they do not often see anymore , " he continued . " We hope in this way no one else was hurt because of this problem . "

The statement was made ​​after Kim Do Yeon's agency tweeted that he was told to cover up his relationship with L. At first he agreed to remain silent for the sake of the common good . But now finally speak out because they are no longer bothered by fans hold L and threatened to report to the police .

Kim Do Yeon claim often receive terror will be killed , his car vandalized and his family harassed since the scandal emerged with L. He finally ventured to uncover the fact after seeing his parents fell ill because of the stress thinking about his daughter continues to be disturbed . He also felt guilty to be in contact with other people because all these nodes .

" After seeing my mother cry , I think it failed to protect the people I care about so I'm sure to uncover all of this , " Kim Do Yeon tweets . " Although we may be criticized for dating but I guess I did not do anything wrong to have to experience threatened and personal information distributed on the Internet . "