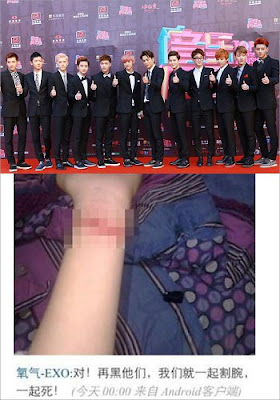 Netizens again struck by the extreme action of an EXO fans. Taiwan media, TTungsun News, reported a Chinese fans have posted a photo of her wrists with a knife slice it. As a result netizen uproar and debate.

According to reports, the reason is because the hand wrenching Lu Han's birthday on April 20. At that time some of the fanbase trying to hold a birthday party even though Lu Han Sichuan earthquake had just happened. No doubt the attitude of inviting criticism from netizens for not being sensitive situation.

"If all EXO members die then fans will hold a funeral," wrote one netter. Then post the invite debate until finally strayed far from the topic of Lu Han's birthday. Apparently an outraged fans criticized his idol and he defended his own way.

"I slashed my hand better than seeing all EXO members die," wrote the fan while uploading photos bloody wrist. "If you criticize them, we all will be slashed hand and die."

Chinese netizens were shocked by the attitude of the fans and the more incentive to criticize. "Do your parents know you do that?" wrote a netizen. "Your attitude only makes the ugly idol image," added another. "It's too crazy."