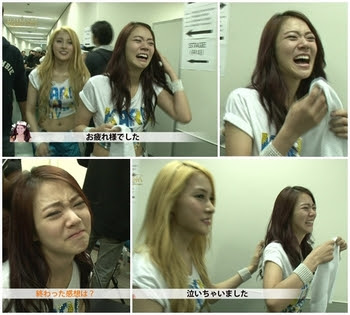 Kara DVD concert at the Tokyo Dome, Japan, has just been released. Interestingly, there was a great cry Seungyeon scene behind the stage, the fans thrilled to see it.

The story, Seungyeon would like to thank all the staff by saying "You're doing a good job". After that, she started to cry.

Park Gyuri then tried to calm her down. When Seungyeon aware of his camera, he immediately mastered himself and smiled.

"How cool cry once," commented fans. "I'm sad to see him cry. He must have been very touched by the hard work of the team," said another fan.

January, Kara was honored as the first girlband Korea could hold a solo concert at the Tokyo Dome.