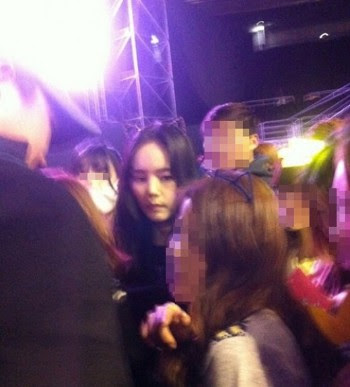 Han Ga In has long been revealed to the public that he is a big fan of G-Dragon. He also proved his dedication as a fan when the leader of Big Bang's solo concert. Han Ga In looks come mingle with other spectators.

G-Dragon launch his solo world tour concert "One of a Kind" with a concert for two days, March 30 to 31, in Seoul. Apparently Han Ga In coming to watch on the first day. Unmitigated, he watched the concert of the festival together with other fans.

The presence of the figure of the serial "Moon That Embraces the Sun" were wearing casual clothing was caught on camera fans. "Today in concert GD, Han Ga In is on the stand," he wrote in an online community of fans responded by netizens.

"The most beautiful VIP," a netter. "I imagine he's too desperate hunt for tickets because it is hard to let alone festival," added another netter. "I'm glad his status as a famous celebrity did not stop to enjoy the concert as other fans."