Hyoyeon SNSD Ever Going out with Kim Jun Hyung 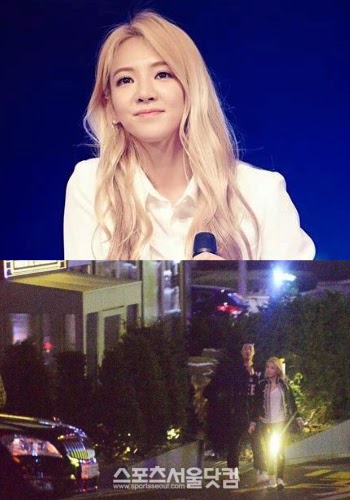 The emergence of news courting Tiffany of Girls ' Generation followed by rumors that hit her, Hyoyeon. Hyoyeon beating incident to the police apparently tipped to reveal who her lover. It turned out that the man who was accidentally hit it was a former lover Hyoyeon.

Sports Seoul photographing Hyoyeon when eating with a writer named Kim Jun Hyung ( 35 ) in the last month. Togetherness was also sparked rumors the two are dating . Moreover, it was discovered that the " male friend " referred to in the beating incident on April 1, it was June Hyung.

Hyoyeon and Jun Hyung reportedly met through acquaintances and eventually going out for two years . But they 've broken up and recently reversal again later caught on camera eating together at a restaurant in Gangnam.

" He was actually a boyfriend Hyoyeon. After the incident , both of them away but his status is still lovers . Yet clear how their relationship actually, " said a source. " After the joke was so big issue seems to make them more depressed to continue the relationship. "

Circulation of these issues ultimately addressed by SM Entertainment. They admit that Kim Jun Hyung is a lover Hyoyeon but are separated . Even so they say do not know whether it's beating incident that made ​​them break up.
Tweet
Posted by News Korean Entertainment Labels: K-Pop News, K-Pop Scandal, Korean Drama Serial TV News, News, News Scandal Korean, Scandal Korean Drama Serial TV News
Newer Post Older Post Home