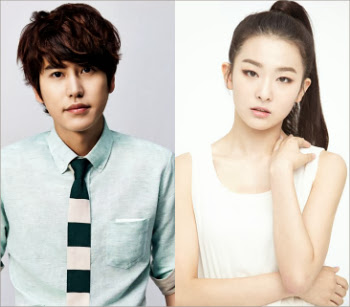 In August  Kyuhyun Super Junior 's teased on " Radio Star " because Krystal f ( x ) reveals she has a crush with one of the trainees . Now trainee named Seulgi has been announced will debut in SMRookies group . As a result the name Kyuhyun back now busy talking .

Apparently after SM Entertainment announced it will bring a lot of media to discuss recognition SMRookies Kyuhyun on " Radio Star " first . At that time she admitted attention Seulgi , even made a video message at the event . But now he insists that there is no relationship with the 19-year -old girl .

"You made ​​me have to go in Twitter again . Coverage was not true , he 's not my boyfriend , " Kyuhyun wrote on Twitter . " I'm just one of the seniors who want to encourage him . "

Although annoyed but Kyuhyun seems nonchalant because eventually even help promote SMRookies via tweet. "Who SMRookies ? They are Seulgi , Jeno , Taeyong . I hope you can be the ideal romantic partner for everyone and have a happy ending story , " he added .

SMRookies a pre - debut group consisting of two boys , Jeno ( 13 ) and Taeyong ( 18 ) and one girl is Seulgi . BC also recently reveals their teaser photos and videos on Twitter or Facebook.