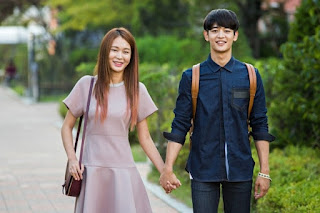 "Because It's the First Time" diligent upload pictures from the set. Today, Wednesday, September 16, 2015 the production team re-uploaded some new photos from the set.

Minho's face again seen in the photos. In one photograph, this SHINee members seemed to go along with the girl. Fans made gutted see Minho took the girl's hand tightly.

Oh Tae actor's face also looks happy in the photo. Wearing a dark suit, a smile could not be separated from Minho face for holding the girl, The question is, whether the girl's lover or friend Minho?

While in another photo, Minho seen spending time together with friends throughout his gang. Looks, Minho sit down with Kim Min-jae and Lee Yi Kyung. All three compact observing Hye Jung Choi action that looks ready to run.


On the other hand, "Because It's The First Time" will premiere on October 8, 2015. The drama that aired in OnStyle will present Yoona of Girls' Generation as a cameo in one episode.
Tweet
Posted by News Korean Entertainment Labels: K-Pop News, Korean Drama Serial TV News, News